Day 01 :
Jodhpur
Arrival Jodhpur, Famous for its magnificent forts and palaces, Jodhpur is the second largest city of Rajasthan and a major tourist attraction in the country. The city is situated at the edge of the Thar Desert with Jaisalmer on its west, Barmar, Jalor and Pali on its south, Bikaner on its north, and Nagaur on the eastern side.

Afternoon sightseeing tour of Jodhpur, The forts and palaces in the city are the major source of attraction in the city. Exploring the forts gives you a feel of the times when the Rajput might was at its peak. The gates and the walls of the forts speak of the battles they have witnessed. One needs to spend enough time with these historical monuments to fully grasp the grandeur of the Rajput era.

Some of the major attractions around Jodhpur are Mehrangarh Fort, Jaswant Thada, Umaid Bhawan & the Government Museum and Zoo.


Day 02 :
Jaisalmer
Morning drive to Jaisalmer Jaisalmer is an important destination of the western state of India, Rajasthan. A desert city, it was founded by the Bhatti Rajput chieftain Rawal Jaisal in the year 1156. Jaisalmer could be regarded as the western sentinel of entire India and a place worth visiting to get an idea of the native Rajasthan. Located at the heart of the great Thar Desert, it offers the visitor an enchanting world of fable, colour, and history. Moreover, the magnificent wood-and stone-carved mansions.


Day 03 :
Jaisalmer
Morning sightseeing tour of Jaisalmer The golden rays of the setting sun, the colorfully adorned locals, the massive forts and mansions, the extremely fascinating craftsmanship, Rajput havelis, all these make Jaisalmer a place of must visit in Rajasthan. Moreover a visit to the Jaisalmer Fort (the second oldest fort in Rajasthan after Chittaur), Patwon ki Haveli, (the grandest haveli of Jaisalmer), Desert Culture centre and museums gives you some glimpse of this small town's past. The Jain temples meet your religious taste; Salim Singh ki haveli and Nathmal-ki-haveli give you some more idea of the haveli architecture of the town. Besides these, Gadsisar Lake is also an interesting spot that you must visit in this desert city. Afternoon visit Sam Sand Dunes, Ideal for viewing sunsets, these sites will also give you a chance to capture the picturesque sand dunes in your camera.


Day 04 :
Bikaner
After breakfast, check out from hotel then drive to to the imposing walled city of of Bikaner: The city of Bikaner was founded in 1488 from jangledesh or the country of wild bushes. It has been almost 550 years since its inception and the city has spread across the desert and has also acquired expertise viz, camel breeding and dry irrigation which is unique to it. Bikaner city alongwith its rocky scrubland, is located on an elevated plain in the desert. The old city is encompassed by a long embattlement wall which intermittently breaks to give way to five huge gates. Now a major trade center for wool, building stones, carpets, blankets, salt and grain, Bikaner has emerged as the lifeline of the state.

Arrive at Bikaner Transfer to hotel.check in to hotel,take rest at the hotel . later visit to sightseeing of Bikaner.

Junagarh Fort : The famous fort of Junagarh was constructed by Raja Rai Singh in 1593. The fort is one of its kinds with a strong, innovative and formidable structure which is encircled by a water moat which is believed to have bred crocodiles in the past. An amazing network of havelis with courtyards and balconies, watch towers, armory, halls and other the fort exudes an aura of red sandstone (Dulmera) and marble. The grand fort has a long rampart which is almost a 1000m long and is studded with 37 bastions and two entrances. Various monuments such as Ganga Niwas, Rang Mahal, Anop Mahal with it's delicate gold leaf painting. Har Mandir - the majestic shrine, Chandra Mahal with its paintings on lime plasters Phool Mahal with its exquisite inset mirror work and Sheesh Mahal with its unique mirror chamber adorns the fort.and the Karnimata Temple at Deshnok. Also visit the prestigious camel breeding farm in the evening. Later back to hotel . overnight stay at hotel in Bikaner.


Day 05 :
Bikaner - Departure
After breakfast, check out from hotel & transfer to railway station for the onwards journey. 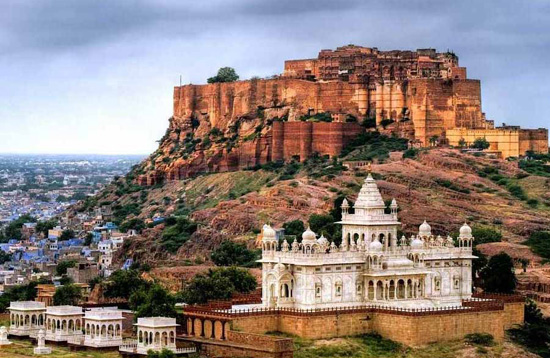